When the General Conference on Weights and Measures (Conférence générale des poids et mesures, CGPM) took place in November in Paris, the second was in focus and several decisions were made that will affect how we measure time. What is actually going to happen? And why is it important for an innovation authority?

- The background is that researchers have developed a new technology to measure time. Currently, time is measured with conventional atomic clocks, but now measurement with optical atomic clocks has taken over, which is actually about 100 times better. Then it is important that we instead apply optical time measurement, says Tobias Kampmann, programme manager at Vinnova and one of Sweden's representatives together with RISE (Sveriges Tekniska Forskningsinstitut) during the conference in Paris. 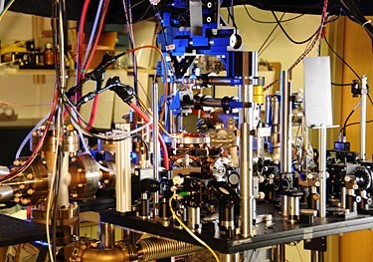 This is what the optical atomic clock looks like, which will control how long the new second is.

How accurate is optical timing?

- Imagine that you started two optical atomic clocks to measure time in connection with Big Bang 14 billion years ago. Today they would show the same time with a tenth of a second difference. By comparison, a conventional atomic clock would differ by up to ten seconds and a regular quartz clock by up to 80,000 years from the optical atomic clock.

What does this concretely mean for all of us with a new kind of time measurement?

- An example of a common application is if you use GPS when driving a car. The distances are then assessed using four satellites and the time it takes for the signals from the satellites to reach your mobile. If all four satellites are equipped with better atomic clocks, we simply get a better measurement result. Another application is how we use satellites to measure sea level and how the large glaciers are melting, which is important to assess how millions of people are affected by rising sea levels and what measures are needed to protect people from extreme weather phenomena.

When does optical timing come into effect?

- With the decision made now, the member countries of the CGPM have agreed that the current way of defining time is not enough. The resolution is just the start of a process that will be followed up in 2026 and then concluded with an expected new definition of the second in 2030.

What role do Sweden and Vinnova have in the decisions about time and units of measurement?

- It is a fundamental prerequisite for research and innovation system all over the world that we have an international, uniform and functioning system for measurements and units. It is also of the utmost importance that decisions are made by consensus of all the participating countries. Vinnova and RISE ensure via funded project that Sweden contributes to a functioning collaboration within the CGPM.

A new resolution regarding the so-called "leap second" was also adopted. What does that mean?

- The time we use in our everyday life is called UTC (Coordinated Universal Time), which is based on the time shown by the atomic clocks (international atomic time, TAI) but which is corrected according to another time, UT1, which is based on the speed of the earth's rotation. Because it was Big Bang who gave speed to the earth's rotation, over time it has also meant that the earth's rotation time has become slower, which makes our day longer. 3.5 billion years ago when the first life formed on earth, the day was actually only 12 hours long. An atomic clock doesn't care about this about, so therefore we've had to correct the day by adding a second to UTC about every eighteen months to maintain our 24-hour day. But the Earth is a bit flexible and in recent years it's actually rotated a bit faster again. Then you want remove the current correction with "leap second" and in the new decision made at the conference we shall instead start planning for a new handling and replace with a system where you sum up seconds nds and resets the clock over longer periods of time instead.

What are the consequences of time correction as it is now being done?

- Correcting the time every time involves a huge risk, as all digital systems are based on UTC time. If something goes wrong and time is not measured uniformly, entire socially relevant systems can be knocked out, such as energy systems, telecommunications systems and so on. We could not have a common banking system in the world if we did not have uniform time. The decision that has been made now means that we agree that the current method of correcting time is not good enough and is even dangerous for humanity and that we will arrive at a solution by 2026 with the hope of implementation by 2035.

Decisions were also made about new prefixes for measurements, so-called SI prefixes. Why are more needed?

- When we describe, for example, length, we start from the meter and put a prefix in front to describe the size. Kilometer is 1000 meters and millimeter is one thousandth of a meter and so on. In order to make the research more comprehensible to society, we now need prefixes that describe both larger and smaller sizes than we previously had names for.

What are the new prefixes called?

Jan Johansson is director of RISE NMI and Riksmätplätser and he also represents Sweden during the conference. He notes that the requirements for quality-assured measurement technology are increasing at an increasingly rapid pace.

- We live in an increasingly automated and digital world where the margins are getting smaller and smaller. Regarding time and frequency, we need to be able to agree on a picosecond (ps) level on a daily basis. If you are sitting in a self-driving car, your neighbor's car must also have the same perception of time, otherwise there could be a collision. And if you have a small synchronization error in an energy system in a European country, it can have major consequences for Sweden.

So far, there are few, if any, areas where the new prefixes can be used, he notes. But in just a few years it will look different.

- We need to be about ten years in advance, because rightly so, the industry has these needs, for example within Big Data. Regarding accounting of data volumes, frequency and electrical energy, in everyday life we already talk about Terabyte (TB), Terahertz (THz) and Terawatt hours (TWh) respectively. Here we will soon have to use the prefix Peta more and more often in everyday life. In basic research, you are already sniffing at all the previously defined prefixes. We may manage with what has existed for another five years, but development is happening quickly.

Facts about the international measurement system